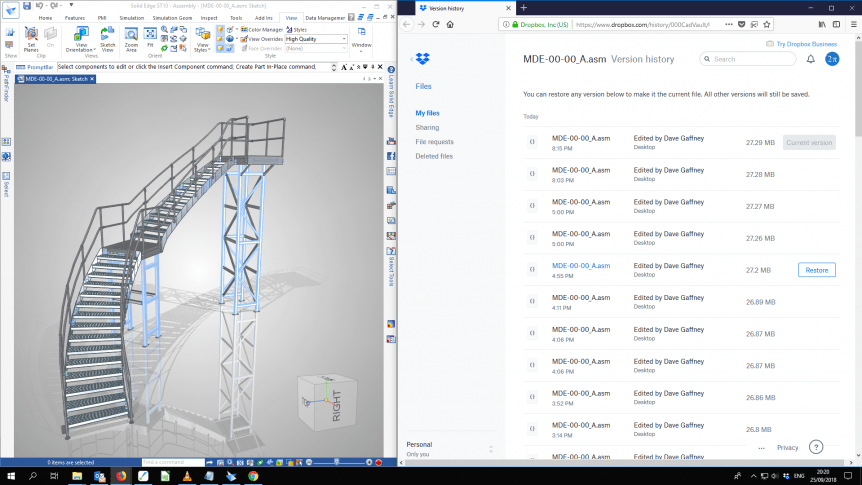 With the arrival of services such as Fusion 360 & Onshape, it is hard to ignore cloud based CAD.

It has obvious advantages, such as ease of collaboration, frictionless communication, lower cost of entry and reduced hardware requirements. Perhaps the biggest advantage is for the CAD companies themselves, where it allows them to eliminate piracy and they get regular recurring revenue if you want to continue accessing “your” designs.

Since ST9 Solid Edge has implemented an interesting mix between traditional & cloud based CAD. It has cleverly allowed you to use services such as Dropbox to work directly from your local computer, while in the background it is seamlessly syncing your files to the cloud.

This has some clear advantages:

There is also one less obvious advantage:

Services such as Dropbox version history work seamlessly in the background. Each time you save a model in Solid Edge, it is overwritten on your hard drive, if you are working from within your Dropbox folder, the newest version will get uploaded to the cloud, but older versions will also be retained on their servers. If you want to revert to a previous version, you can browse through the different versions of the file on Dropbox & select the version you want to restore. This then gets downloaded to your computer in its original location, with the same filename and the same internal ID, meaning it plays nice with Solid Edge.

You can mix and match different versions of parts and assemblies as you choose, with the option to travel backward and forward between versions. No flux capacitor required.

It is a very efficient way of fixing mistakes. It is also a great way if you want to dip your toe into trying out Synchronous Modelling in Solid Edge. If you regret converting a file to sync, the option is always there to revert back to the point in time when it was history based using traditional modelling.

If you would like to get started using Dropbox with Solid Edge, it is recommended that you start by configuring Dropbox to save to a custom location.

This site uses Akismet to reduce spam. Learn how your comment data is processed.